Continuing on from Part 1...

Let's export /genera for use in all our Genera servers, and make a UID/GID especially for that. I'll also export the root read-only directory just in case I want to access any of my other files on this server.

After speaking with tr1nitr0n on IRC, he quickly suggested my problems were with the settings of the HELIUM Machine Type and System Type in the Namespace Editor. Indeed, updating these as follows immediately fixed things: 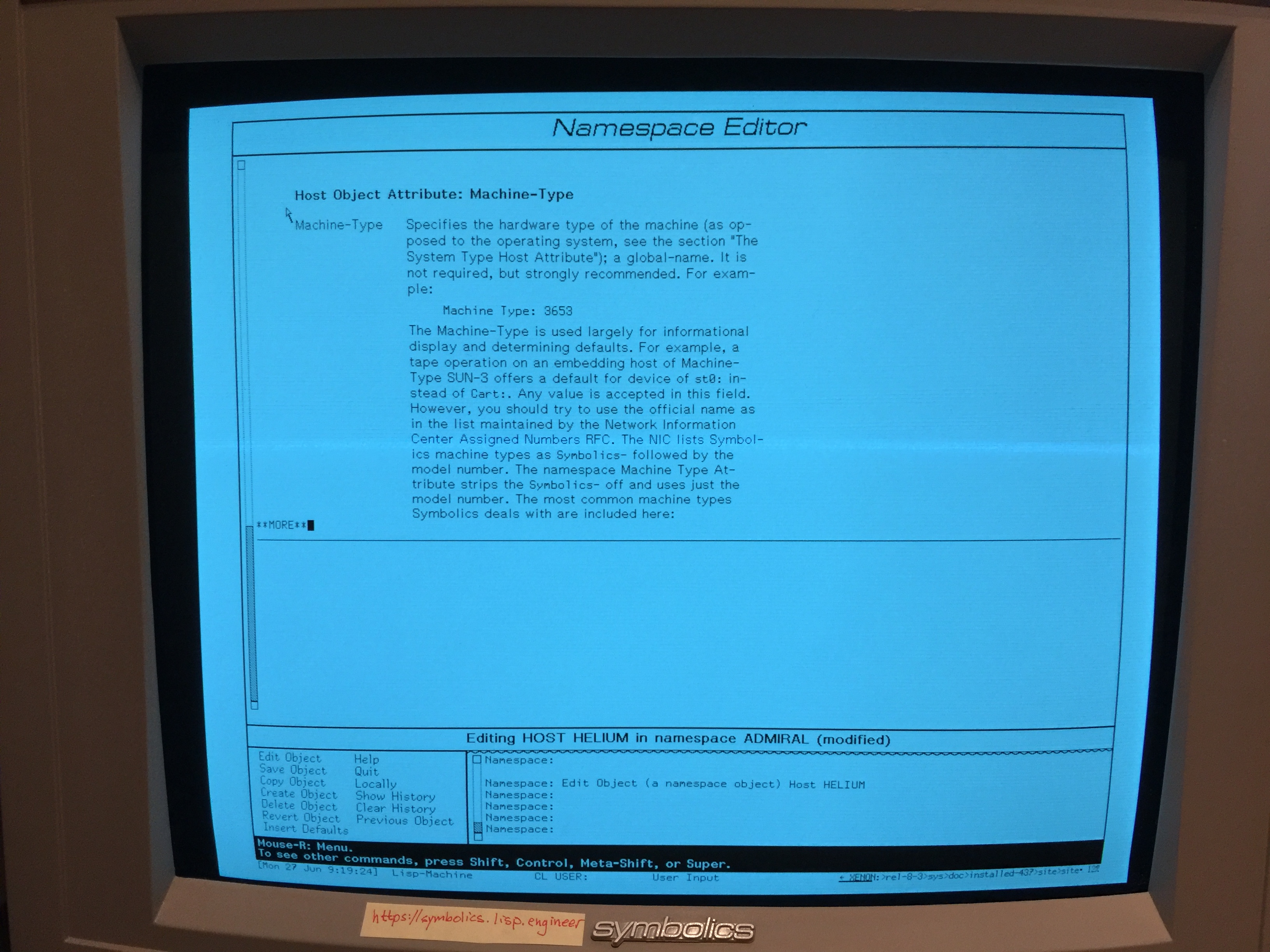 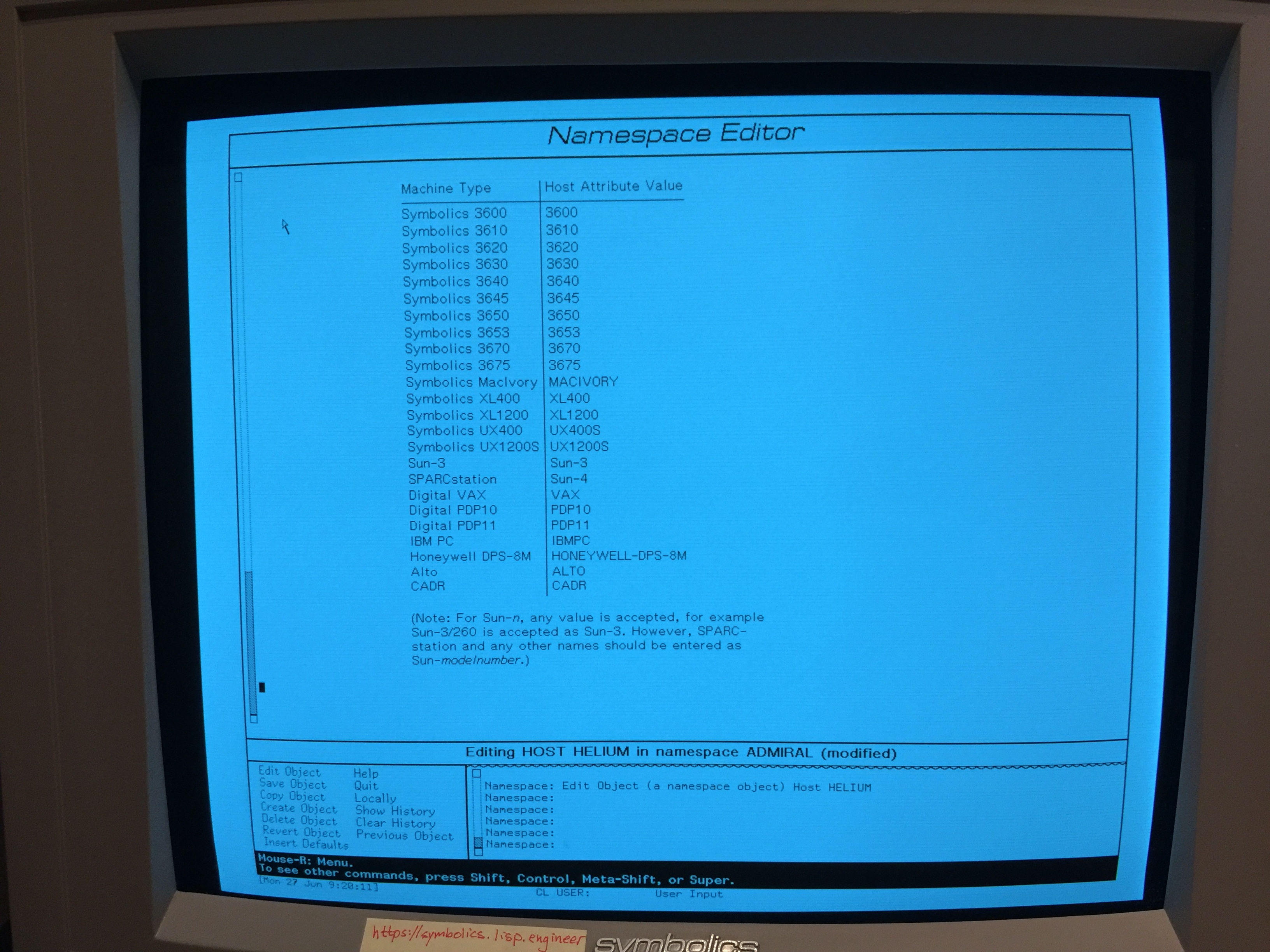 First, I tested ICMP with (tcp:send-icmp-echo "HELIUM") and after the second one, it returned true. (Apparently the first one always fails due to ARP resolution, I read in one of the Symbolics manuals.)

But then... I could get NFS directories to list!

The only problem is that it asks for passwords or User IDs.

I logged out and in again, did the Show Directory and this time it said:

Well, that didn't work. I then set each of these settings below to nil one at a time, logged out, and in, and tried again. Still asked the same thing each time.

What I really want it to do is to use the IDs set up in the Namespace and ignore the UNIX /etc/ files. I thought I had that done by setting these User Properties on the HELIUM host in the Namespace Editor.

I'm thinking that I probably did this wrong, after re-reading Adding A Username-to-UID and Username-to-GID Mapping to the Genera Namespace Database in the NFS User's Guide.

So, instead, I set the same properties (minus -HOST) on my DFields User Object, and the -HOMEDIR to /genera/dfields. Then logged out, and in again. Oh well, still didn't work - asked me for the user name again.

However, notice that the /genera directory is shown with user dfields, but the things that used to appear as root now appear as uid#0 - so I'm just not sure what's going on now.

I'll leave it as a TODO to figure out why it's asking me for that user ID, and how to get all the IDs to look correct, and move on for now...

Next, I'm going to try to see if it versions the files on NFS using the Zmacs editor (which I think is also called Zwei presumably related to the number two). Start it with SELECT-E. After that, if you used Emacs a lot (as I did in life) it's really nothing unexpected.

c-X c-F HELIUM:/genera/dfields/test1.text gets me this screen:

Type some text and c-X c-S gets you this:

Let's take a look in Lisp. SELECT-L to get to Lisp and then show the directory.

OK, so let's modify the file and save it again. It didn't work: The file is write protected.

This doesn't really make sense to me now, as the file isn't write protected on the server:

I hit RESUME and it wrote it anyway, as we can see here:

However, it kept a backup version on the NFS server!

This is documented in the section UNIX Backup Files of the NFS User's Guide.

You can set the number of backup versions that are retained by Genera with the "NFS-GENERATION-RETENTION-COUNT User Property" for host namespace objects.

Files with backup version numbers are not normally represented internally to Gen- era with pathname version numbers. Consequently, no Genera utility treats backup file copies as files with versions. For example, Dired and the Clean File command do not behave as if file backup copies are older versions of the same file.

A user property for host namespace objects. Sets the number of file versions re- tained by NFS when superseding an existing file. The default is 5.

Tr1nitr0n also suggested that I use Set Screen Options to invert the display so it doesn't have as much white. Previously I was using the default white-background display with contrast level 4 (done by typing LOCAL-4 LOCAL-C).

Set Screen Options is really something else. I'll just give you a before and after screen shot to demonstrate how configurable it is.

SELECT-P - just some screenshots for now. 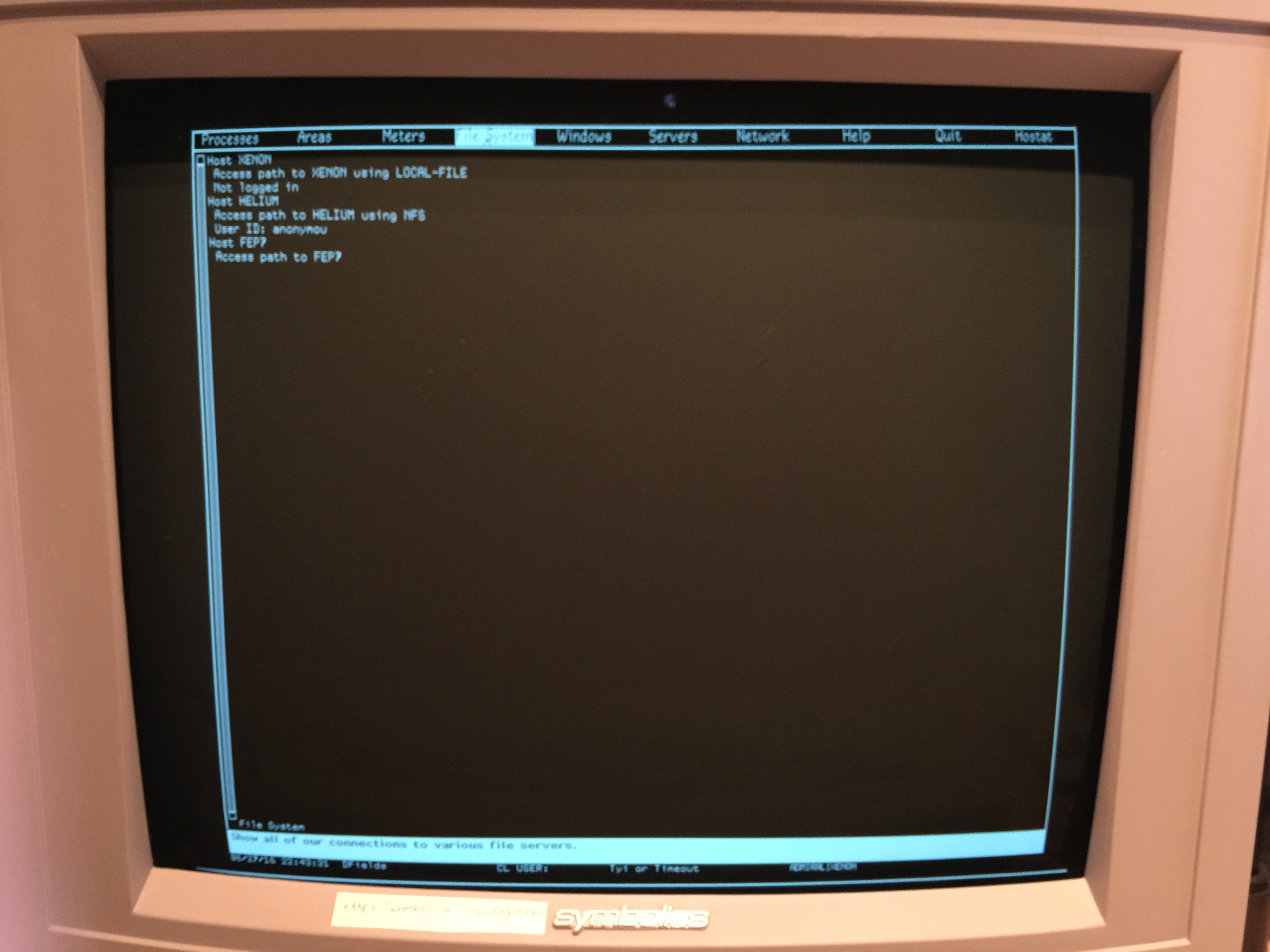 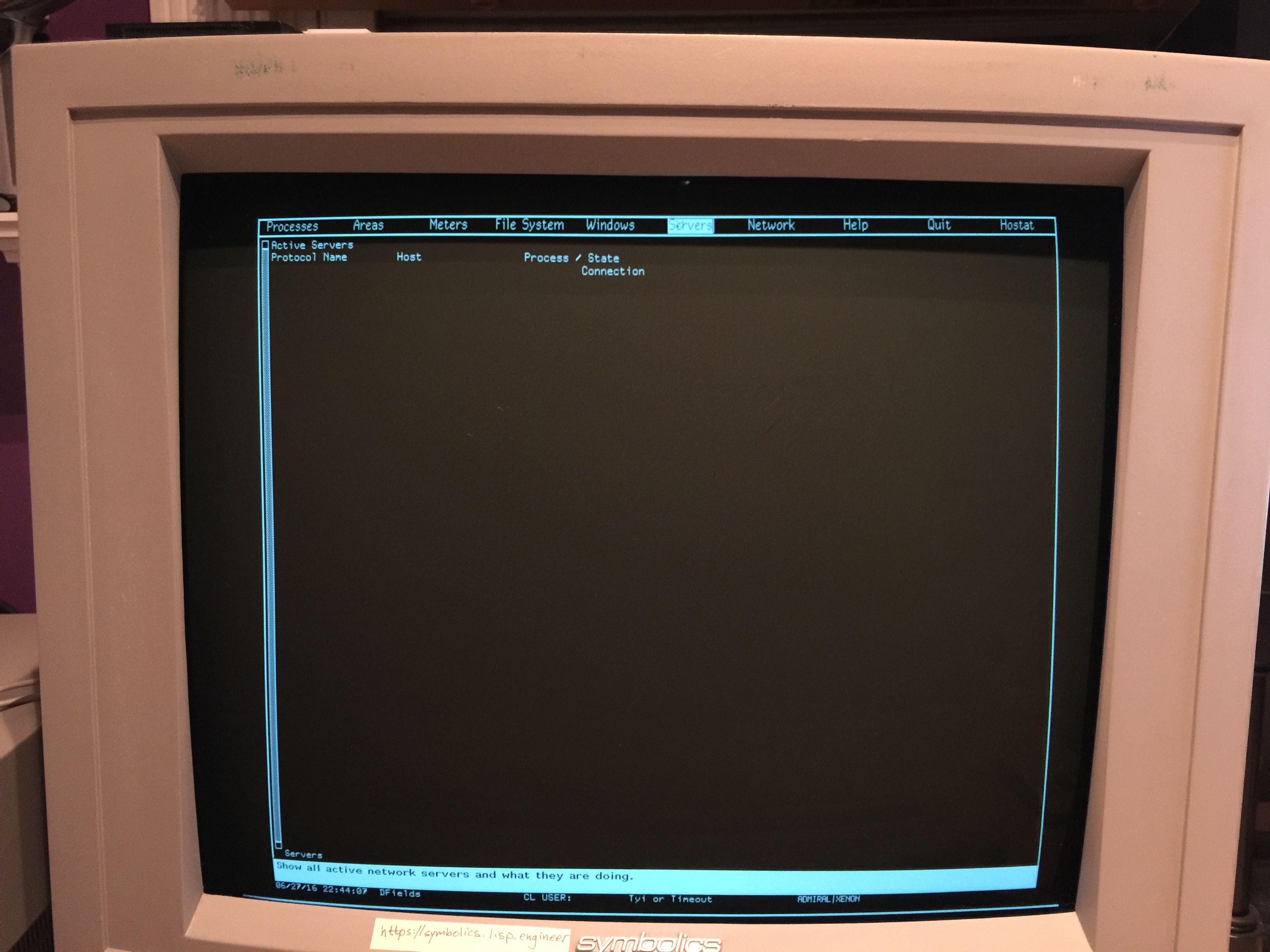 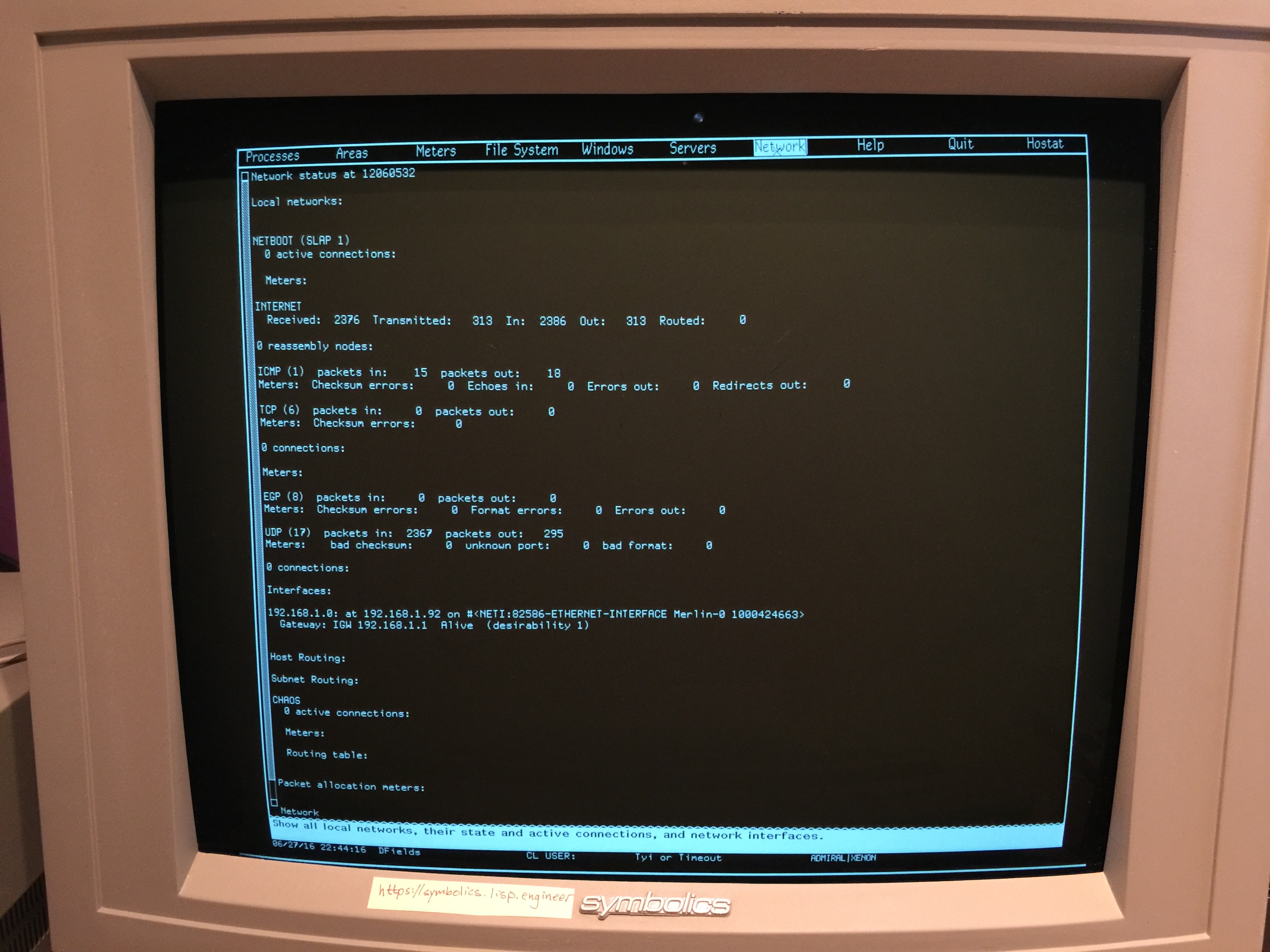 I was asked to share the contents of my FEPfs and LMFS by ams. Now that I can use NFS, this is easy.

Then it's just a quick scp to this web server (and rename to .txt for modern MIME file typing and a trip through xz).

I also discovered that you can use LOCAL for the host name and it will insert your actual host name automatically to use the LMFS.

Finally, I copied the DKS patches from the FEPfs. However, I must remember to set :More Processing off!

There are fine horizontal lines that scroll up the console. Here they are in close-up. I wonder what is causing this? It's not terribly distracting but it is definitely noticeable. 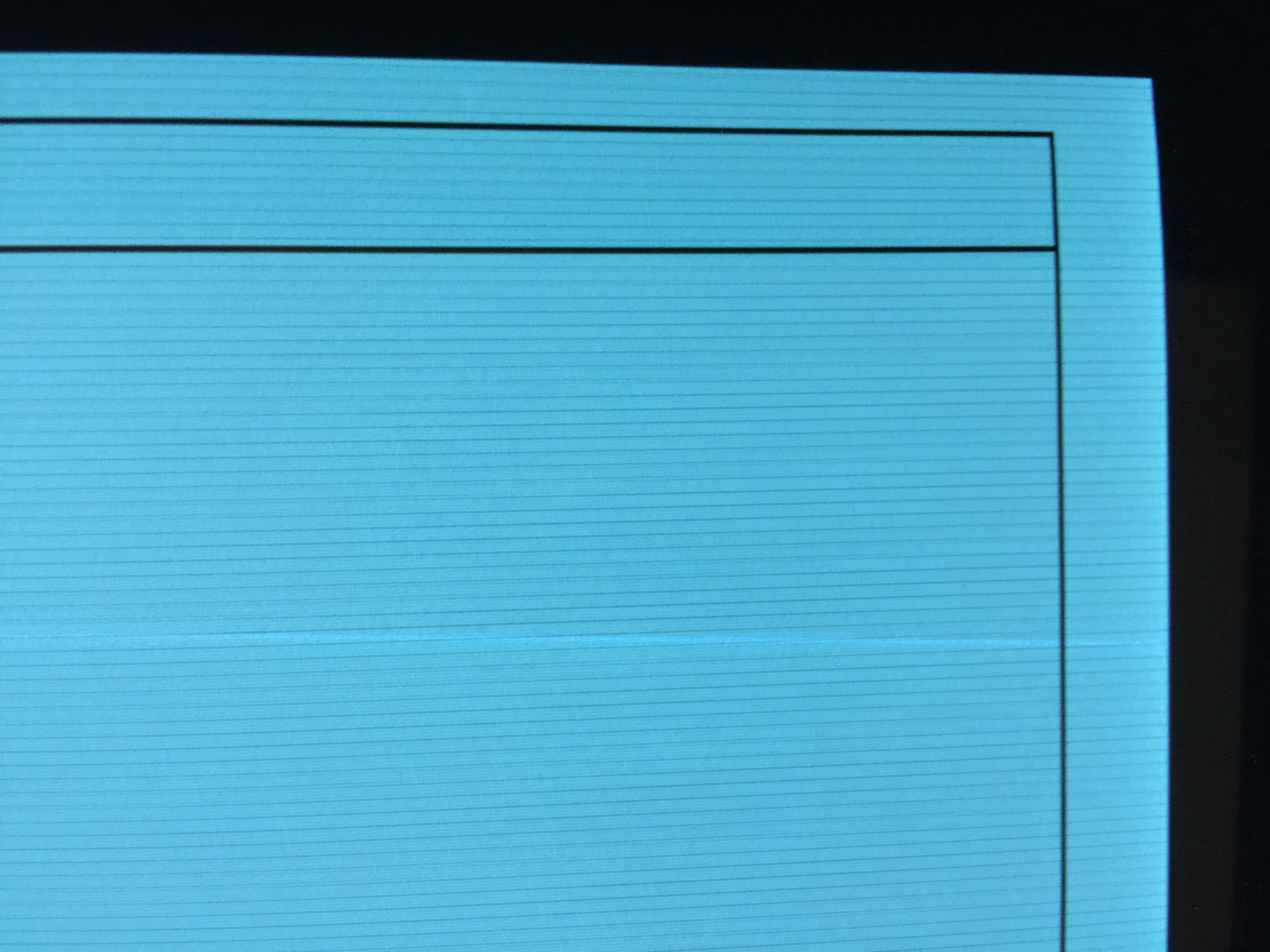 Update 1: Added FEP Kernel image. ams asked me for a few clean filesystems so he can analyze how…